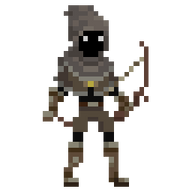 The Archer is one of the enemies in Wizard of Legend.

Keep an eye for the red laser of his aim, as soon as it flashes, dash sideways so you can dodge his attack.

You can fire your own ranged spells to hurt them, or disable them for a second or two, giving you enough time to get closer, allowing you to finish them off with basic or melee spells.

When in a locked room, archers tend to spawn on platforms that aren't part of the main body of land. If there's two Archers, use range spells to disable one archer, and take out the other. Otherwise you'll have trouble dealing with the melee enemies as they continue to zone you.