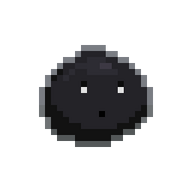 Blob is one of the enemies in Wizard of Legend.

Aside from ranking, the Blob does not have any other variants.

An area clearing attack is the most effective, especially with the higher ranks.

Boots of Frenzy can be a serious plus.

There is a huge blob in the Lanova Museum that splits into many normal blobs upon defeat. This variant cannot be found in the Chaos Trials.