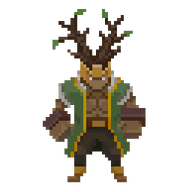 Earth Lord Atlas is a member of the Council of Magic and one of the bosses in Wizard of Legend. He represents the Earth element.

Ancient Earth Drill - Summons a large drill made of stone and rushes towards the player's location for a rapid, multi-hitting attack, similar to

Seismic Slam - Jumps in the air and slams the ground at the player's current location, dealing AOE damage with the stone shrapnel created, similar to

Towers of Terra - Raises several sets of impassable earthen pillars in sequence. The pillars deal damage as they rise.

Rock Punch - Summons 3 stones from the ground, then punches them, sending them flying towards the player's location.

Poisonous Ring - Throws projectiles which create 6 toxic puddles on the ground where ever they land, similar to

Mace to the Face - Creates a giant spiked rock mace and slams it into the ground, dealing heavy damage twice in a large marked area. Only used as Boss 2 and above.

Crawling Wall - Summons a wall perpendicular to his position, then pushes it back and forth along a line dealing damage and stunning. Only used as Boss 3.

Tectonic Tendrils (Signature Spell) - Atlas moves towards the center of the arena and slams the ground, summoning 5/6/7 earth rifts that chase the player with good tracking, similar to