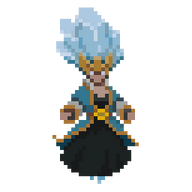 Frost Queen Freiya is a member of the Council of Magic and one of the bosses in Wizard of Legend. She represents the Water element.

Ice Spear (as the first, second, or third boss) in a line in front of her which she fires simultaneously at the player's location.

Dual Blizzard - Conjures 2 red glyphs on the ground that slowly move forward in a line, damaging and freezing anything caught in their hail storm, similar to

Bouncing Bubble and fires them off in the direction of the player.

Aquaaaamehameha! - Unleashes a powerful torrent of water from each hand, moving from her sides to her front or vice versa, similar to Aqua Beam. Only used as Boss 2 or higher.

Avalanche Rush - Transforms into an invulnerable wave of icicles that rapidly chases the player around the room, freezing on contact. Only used as Boss 3.

Snowflake Barrage (Signature Spell) - Briefly charges, forming a line of 20 ice shuriken which she fires in a machine-gun like manner at the player's location.