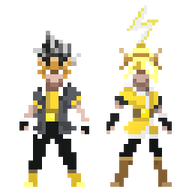 Lightning Maven Juno and Thunder Ace Suman are twin members of the Council of Magic and the only dual boss. They represent the lightning element.

Thunder Drop onto them, releasing a burst of electricity.

Static Dash - Suman will bat 7 metallic balls in quick succession towards the player and Juno will quickly dash towards them leaving behind a trail of electricity.

Thunder Cage - Suman releases a grid of orbs in a square pattern. Juno will connect them with streams of lightning, creating a static electric cage, before she lands in the centre square.

Star Strike - Suman summons five metallic balls at the player's location. Juno will jump and strike at the centre of the orbs, creating star-shaped

Thunder Drum - Juno jumps atop a metallic drum summoned by Suman and beats on it 6 times. Each beat releases a chain of lightning strikes that goes towards the player, identical to

Thundering Chain. They will remain static during this attack, resting at the top of the arena.

Electric Fans - Suman and Juno will sit together in the middle and summon up three fan-shaped Zoner enemies that will roam around the arena dealing contact damage. Only used as Boss 2 or above.

Arc Orbit - Suman creates a metallic pillar in the centre of the arena while Juno connects herself to the pillar with an arc of electricity. She will then travel along the perimeter of the twice in either a clockwise or anticlockwise direction. Only used as Boss 3.

Rolling Thunder (Signature) - Suman summons an electric cage around the arena then spins with a metal hammer, throwing metallic orbs at random points in the arena, while emitting bursts of electricity. Juno will constantly dash between the orbs in a straight line, leaving a lightning connected between the starting and landing points. A faint line of white particles indicates where Juno will dash.

The council members use three of the above attacks when they are the first council member. Each council member adds one more attack before their dance. So the second uses four, the third uses five and