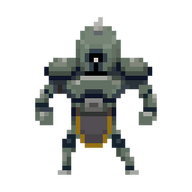 The Laser Cyclops is one of the enemies in Wizard of Legend .

The Laser Cyclops' sole attack is to charge up and fire a slow moving beam of chaos energy at the player, which deals constant damage.

The Laser Cyclops has no variants.

Laser Cyclopes are a major threat in enemy encounters. Prioritise taking them down before other enemies to ensure they do not catch you off guard.

The cyclops is vulnerable while charging up their beam, dealing damage during this time will create an opening.

Several cyclops usually spawn at once. If you get hit by one beam then the others can easily target you, pinning you in place and inflicting heavy damage.