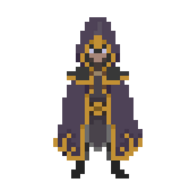 Master Sura is head of the Council of Magic and the final boss in Wizard of Legend. He mainly represents the Chaos element, but uses Arcana from other elements as well.

Sura is stationary in the centre of the arena, surrounding himself with a chaos barrier which must be broken in order to damage him.

Sura becomes highly mobile and dashes around the arena to attack the player. Each cycle he performs 5 attacks in a random order (one of each element, ending in an attack from another council member) before unleashing a chaos signature move. After an attack cycle is able to be stunned, however unlike other bosses he dashes twice during this phase in attempt to evade your attacks.

Sura's Third Phase is a hidden phase introduced in the Phantom Update. To activate it, you must break the 2 purple torches in his throne room after obtaining at least 10 chaos arcana.

This phase will immediately remove

Rules of Contingency and

Chaotic Comedy from your inventory.

Sura teleports to the centre of the arena and powers up with chaos energy, changing his appearance. His patterns are similar to his second phase except he is significantly faster and more aggressive, performing 6 chaos attacks per cycle and preforming a signature every second cycle.

Sura is much harder to damage since he now uses

Chaotic Rift as his dash when attacking (giving him invincibility frames), he is completely immune to damage during his first cycle and the period when he is vulnerable is extremely short.

Nog's Heavenly Boots etc) and will deal damage regardless, even if evade chance exceeds 100%. Guaranteed evade such as Puffy Parka,

The fight consists of two phases. During the first phase Sura is stationary in the center of the stage, surrounded by a Chaos barrier. Deal enough damage to the barrier to shatter it, exposing Master Sura momentarily before the barrier regenerates again. The only way to defeat Master Sura's first phase is to attack him while he's out of the barrier. Aside from the times he uses his

Null Flash Agent this phase shouldn't be challenging to players who made it this far as his attacks are heavily telegraphed.

During the second phase you fight a highly mobile Master Sura who uses boss attacks and player accessible arcanas alike. Focus on dodging his elemental spells and attack from afar.

In his secret third phase, Sura's behavior is similar to the second, but with much less downtime and a new selection of all chaos attacks. All of his normal dashes are replaced with a version of

Chaotic Rift, letting him cover the ground more quickly and making him invincible while he does it. Furthermore, your window of opportunity to stun him after each attack cycle is reduced to a fraction of a second, and even if you do stun him he recovers more quickly. Even the attacks themselves are executed quickly, make it even more difficult to damage him during his attack phase.

It isn't all bad, however. Though there's less time to anticipate his attacks, the fact he no longer has the same selection of wide-ranging arcana means you don't have to predict which specific attack he's using to adequately dodge it like you often do in phase two. He even does away with his agent summons at this point, allowing you to focus all of your attention on him personally.