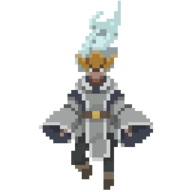 Wind Sovereign Shuu is a member of the Council of Magic and one of the bosses in Wizard of Legend. He represents the Air element.

Air Jab - Shuu will briefly target a line before making a jab in that direction which fires a large gust of wind. This is done 3 times.

Twister Burst - Shuu will strafe along either side of the arena, releasing 3 masses of swirling winds that linger for a long time, similar to

Whirling Tornado around himself and dashes toward the player twice. If he hits the player he will not dash a second time.

Vortex - Shuu will create a vortex around himself, pulling the player in and dealing damage if they get close enough. Very hard to avoid.

Homing Twisters - Shuu will create a pair of tornadoes which move quickly around the arena, loosely homing in on the player.

Air Burst Shurikens - Shuu throws 3 shurikens in a wide arc in front of him which stop after a short distance and release a AOE burst of air around themselves.

Turbulence (signature) - A series of consecutive targeting lines will appear across the arena, aimed at the player. After less than a second of delay, these lines will form into violent wind currents that will deal damage if the player has not moved.